The State of Hawaii is one of the most popular tourist destinations in the United States.  Canadians, in particular, love the state!

Situated in the middle of the Pacific Ocean approximately 20 degrees north of the equator, Hawaii enjoys a wonderful warm climate year-round.

Oahu is the heaviest populated island in Hawaii and home to its state capital, Honolulu. The principal tourist area is Waikiki Beach which is located on the southeast coast of the island near Diamond Head.

Maui is the second largest island in the State of Hawaii.  It is world renown for its beautiful beaches, fantastic swimming, surfing, snorkeling and skin diving.

Sailing, boating and whale-watching are also popular activities on the island.

Kihei is Maui's largest community.  Vacation communities along the west coast include Lahaina, Kaanapali and Kapaula. The south coast is quite mountainous and not easily accessible. 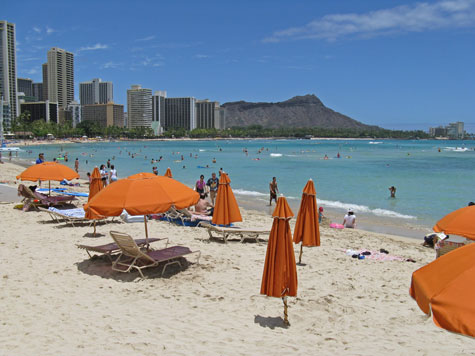 The Hawaiian island of Kauai is a popular destination for golfers, hikers, windsurfers and scuba divers.  Due to its green forests and beautiful flowers, it is known as the "Garden Island"

Much less populated than either Oahu or Maui, Kauai is perfect for people who love the outdoors.

Molokai is located northwest of Maui.  It has been part of the United States for years, but is less known than either Oahu or Maui.  Molokai is a popular destination for horseback riding, mountain biking and all the ocean sports.

The town of Kaluaaha is the largest community on the island.

The Island of Lanai is the sixth largest island in Hawaii. The one and only community on the island is Lanai City which is located on the western side of the island.

Ferry service runs between Lahaina (on Maui) and Lanai and costs approximately $20.

The Big Island, as the name would suggest, is the largest island in Hawaii.  It is also one of the most beautiful tourist destinations in the United States.

Among the many attractions to be found on the island is Mauna Loa, the massive volcano that rises to an elevation of 13,680 feet.

Visitors to the Big Island can swim in the tropical waters of the South Pacific in the morning and frolic in the snow at the top of Mauna Loa in the afternoon! Hilo is the main city on the Big Island.